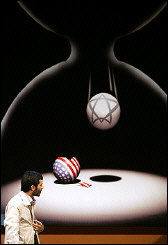 There’s a new exclusive club, succinctly named Zionot. It has the elegance and brevity of a mathematical term. Its aim is as lethal as sniper’s bullet.

Consider it a celebration by the Religion of Peace in Ramadan. What are they celebrating? A world finally made Judenrein. According to Iranian President Mahmoud Ahmadinejad, it is imperative that Islam “wipe this stigma (Israel) from the face of the Islamic world.”

This effort, dubbed “The World Without Zionism,” is being co-ordinated during a week of special events in thousands of mosques, schools, factories, etc. It is designed to create a critical mass of jihadist zeal. Syria and Lebanon and even Afghanistan are holding simultaneous activities for the same purpose.

Ahmadinejad’s vision is apocalyptic. This is not about politics; this is about religion. It’s important to remember that religion and politics are one and the same for Islam. That’s why there can be no negotiation, only holding patterns.

Of course the “world community” has reacted predictably with stern notes, lectures to Iranian ambassadors, and announcements by governmental leaders regarding their grave concerns. Always on the brink of hell, we have pronouncements about grave concerns. It is the mass graves that should concern us.

Back in 2002, Lee Harris explained the fatal consequences of Islam’s “fantasy ideology.”

For the Arabs and their fellow travelers, anti-Semitism is the air they breathe. Jews are not real; they are evil “props to be pushed around,” even eradicated.

Why now? Why, at this juncture, did the president of Iran pick up that old discredited 20th century banner? Why the New Holocaust?

Let’s look at the lay of the land.

Iraq, despite the efforts of the global appeasers, is on its way to becoming a functioning democracy. The nationwide vote on the constitution reverberated throughout the unfree Islamic states. With the Coalition’s support, Iraqis are on the road to the 21st century. Syria, humiliated by its forced relinquishment of the golden goose on the Mediterranean littoral, now faces the imminent collapse of the Baathist Party and the Assad dynasty. Egypt is holding elections of a sort. Jordan has its head down, hoping to avoid the shrapnel, while the wicked House of Saud is frantically shoring the walls of its house of cards. Meanwhile there is that Wall in Gaza, a monumental insult and reminder of failure to the Palestinians in particular and the Islamic world in general.

Things are unsettled, to put it mildly. The only bright spot, from the point of view of the Great Islamic Jihad, is those Iranian nuclear weapons. For a long time the mullahs waltzed with the French, marking time and making faces until they could finish the plan that has been so long a-borning. The ultimate fantasy, about to become a murderous reality.

Here’s one analyst’s breakout of Iran’s incentives for what appears to be a suicidal enterprise:

Given the pre-emptive and lethal nature of Zionot, the possibility of a general Middle Eastern conflagration has escalated into the red zone.

Is this the Big One, the one in which the boiler finally explodes?

History has never been Islam’s strong point. Nonetheless, Mahmoud Ahmadinejad would do well to ponder the fate of Ozymandias:

I met a traveller from an antique land,
Who said— “two vast and trunkless legs of stone
Stand in the desert … near them, on the sand,
Half sunk a shattered visage lies, whose frown,
And wrinkled lips, and sneer of cold command,
And on the pedestal, this legend clear:
My name is Ozymandias, King of Kings,
Look on my Works ye Mighty, and despair!
Nothing remains beside. Round the decay
Of that colossal Wreck, boundless and bare
The lone and level sands stretch far away.”

Perhaps some kind soul will send him a copy of Shelley’s poem. Gates of Vienna suggests that a Farsi translation be slipped into Condoleezza Rice’s briefcase for her next trip to Teheran.

NB: This post was a Baron-Dymphna collaboration. They are still speaking to each other.

27 thoughts on “The Fate of Ozymandias”