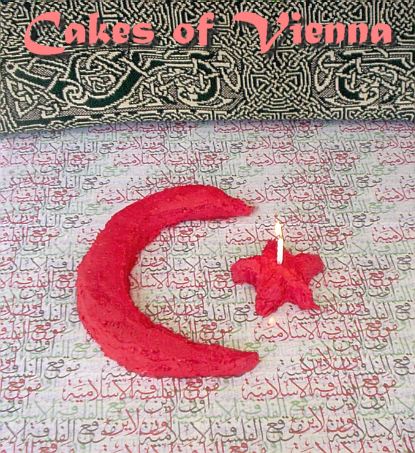 How do most blogs start? Probably, like us, you spend a great deal of time looking and lurking. Eventually you settle on your favorites. Your next step is a momentous one: you begin commenting. As time goes on, your comments increase in length, if not in quality.

It’s starting to occur to you at this point that you’re taking up too much room in someone else’s space. Time to get a place of your own, one with its own personality and focus.

For Gates of Vienna, the choice seemed obvious. Ever since 9/11, it was hard to escape the realization that in-your-face terrorism had become the defining issue of our time. Of course, the Great Islamic Jihad loomed as far back as 1972 and 1979 and 1983 and 1993 and 1998 and 2000… From our side, at least. On the other hand, for the mujahideen, the current war dates back to at least 1683.

Hence the name for our blog.

So that was our start. Drawing on the energy and optimism of Wretchard at the Belmont Club, we set out to make our case.

By now we’ve seen lots of lists of what to do and what not to do in blogging. Back then, though, we were flying by the seat of our pants. In other words, bouncing off a few trees and taking a few lines of washing out of people’s back yards. Sometimes we got chased.

Kind people helped along the way. USMC_Vet told us what a site meter was and how to get into NZ Bear’s TTLB Ecosystem. Until then we had no way to know who our readers were, aside from our commenters.

Where did we learn to link-whore? Probably from Bill Ardolino at InDC Journal, when he chastised someone for what he considered “shameless” link-whoring. Having little shame, we quickly adopted the practice with great dedication. Without the generosity of Charles Johnson’s open threads at Little Green Footballs, we would still be Insignificant Microbes. But, thanks to the enthusiasm of his Lizardoids (Bwahahahaha!), we began to climb the food chain.

Then the great surprise: being blogrolled by our BlogDaddy, Wretchard himself. During the daily reading of Belmont Club, the Baron would idly scroll to the “G” section of Wretchard’s blogroll. It wasn’t that he ever expected to see “Gates of Vienna” there — it was just his Walter Mitty fantasy, one that made me roll my eyes. But I was the one who first spotted the impossible. “Double-take” does not adequately describe my reaction. Scroll up, then back down again. Yeah… it was still there. Even after all this time, seeing “Gates of Vienna” on Wretchard’s site still makes me smile. Some things just don’t get old.

The ’lanches were great giddy fun. Coming down from them was disappointing, but we did notice that each new traffic baseline following a ’lanche leveled off just a bit higher. We were learning that success is incremental and patience is essential.

We have been singularly fortunate in our commenters. They are intelligent, often witty, and quite knowledgeable. They come from literally every corner of the globe. We stood corrected more than once; we got sent to interesting sites; we learned, and we learned. We’re still learning.

Other bloggers have told us about their unfortunate experiences with trolls and hateful email. Our trolls have been rare and mild, and never stay long. So far (knock wood) we haven’t gotten any hateful email, just the occasional disgruntled, puzzled Muslim.

It was commenter truepeers who first discussed Viennese crescents. He mentioned that they dated from the siege of Vienna, and commemorated the victory over the Turks.

To celebrate our first anniversary, I thought a batch of crescents would be fitting (in the old days, I used to make them for Christmas cookies, having no idea of their origins) to celebrate a whole year’s survival. However, in the interim between my idea and our anniversary there blossomed in a field in Pennsylvania the “Red Crescent of Embarrassment.” Nothing would do for the Baron but that we create our own red crescent and star. He insisted that some part of this confection contain lard. Real, true, rendered pig fat! So lard it we did.

Pictured above is our celebration of survival, a small thumb of the nose at Islamofascism, and our very own embarrassed red crescent.

For the skeptics among you, that is not a snake. It is not Play-Doh. Made lovingly from haram Betty Crocker cake mix — you can be sure this cake wasn’t going to be made from scratch — and iced with a mixture of lard, Crisco, powdered sugar, and the last of the red food coloring left over from Easter eggs. Did we eat this thing? Surely you jest.

See you here this time next year. Provided the Gates hold.

21 thoughts on “God Willing and the Gates Still Hold”