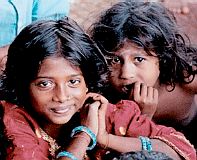 India has a male-female ratio problem. Every Indian family prefers boys. For one thing, boys have the economic power in adulthood to take care of parents in their old age. For another, girls and their dowries and trying to marry them off are expensive propositions.

This seems contradictory to us, in our market-driven economy. For us, the value of a thing increases as it becomes rarer. However, in culturally-driven situations this rationale doesn’t necessarily hold sway. Women in India simply do not have the same status as men to begin with, and they certainly don’t have the earning power or the economic freedom after they marry to be able to take care of their parents. Once a woman marries she is under the thumb of her husband and her husband’s family. In some cases, she can be maneuvered into having to beg her family of origin for more “dowry money” even though she is already married and in theory has been accepted into her husband’s family at the asking price when the marriage took place.

Thus, as a result of cultural prejudice and India’s population control programs, there simply aren’t enough women to go around. As FuturePundit noted a few years ago:

Now the Indian government has come up with a scheme it hopes will ameliorate the situation. Here’s the carrot:

In order to get around what it sees as the need to prevent a rise in population, the government will only offer this free education to single-girl households. In families where there are two girls, only one will receive a free education.

In some ways this is a clever scheme because it hits a vital nerve for all Indians. They revere education and make sacrifices to insure that their children — especially the boys — receive good schooling. By offering this to the parents of girls, they level the playing field somewhat.

But only somewhat. There is still the cultural preference for boys and there is still the drive to sharply curtail the population. Thus girl fetuses are aborted at an alarming rate, as they are all over Asia. Criminalization of sex-preference abortions has had no effect on this trend, nor will it, at least not until the underlying economic fears are addressed.

Japan offers proof of this. There, girls are well-educated and are economically free to support their parents. So guess what happens?

And there lies the key for any real change in valuing one gender over another. In a culture where girl children are economically free in adulthood, the parents are cared for. In places like India and China the boy-child choice is driven by economic circumstances, too. Until “family values” about who rules whom in marriage changes, offering freebies for having girls is not going to make any long-term difference.

One final observation about the consequences, historically, for boy and girl children in rural agricultural societies in the West, societies similar to the rural agrarian features of India. This one is from Germany:

Just goes to show that Cinderella stories have some biological basis, hmm?

6 thoughts on “Sugar and Spice”