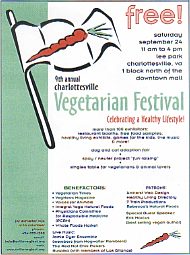 On Saturday I reported on my visit to the Charlottesville Vegetarian Festival (see Visualize Industrial Collapse). Groups like “The Coalition Against Civilization” weren’t the only ones I encountered; there were also some more-or-less normal people there. But all of them had in common a certain level of political activism, plus a center of ideological gravity that definitely listed to the left.

Then I came around a corner and encountered the Falun Gong.

There were two people on a prayer mat meditating silently while Chinese music played on a sound system. Next to them an earnest young Chinese man presided over a table diplaying posters and literature. I spent some time looking through the materials on the table, and then turned to the young man.

“You realize that you’re kind of in the enemy camp?” I asked him, sweeping my arm around to indicate Lee Park with all the other exhibitors and their visitors.

“Yes?” he said tentatively, smiling at me.

“I mean, these people, they’re all leftists — until quite recently they were great admirers of the People’s Republic of China.”

I realized that he had no idea what I was talking about, so I let it go. I continued to look at the table, then took a brochure, thanked him, and moved on.

It’s true that the Left is not as fond of the PRC as it used to be. After all, they don’t like the new capitalism that China has introduced — how could true socialists do such a thing! But you don’t hear too much from them about China any more, not much mention of Tibet or forced abortion or Tiananmen Square or the laogai.

The brochure is packed with information.

Not all of the Falun Gong practitioners being persecuted are Chinese or in China itself:

All of this for something that looks to an inexperienced outsider more or less like yoga. 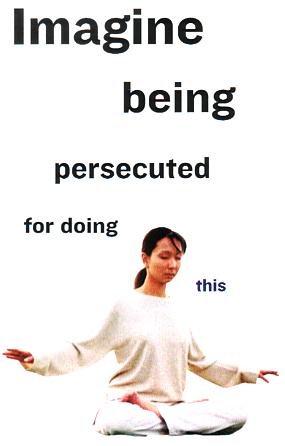 Imagine it. It’s easy, if you try.