I had to look up your name since I have avoided your story as much as possible. Not out of a lack of compassion for your sorrow, but rather because of my own fragility and the sorrow I carry for my own dead daughter.

Here’s what I know about your story — and when you think about it, to have learned this much despite not having a TV and making an effort to avoid learning about your odyssey, it’s amazing I know as much as I do.

Your son Casey was a soldier and he died in Iraq. At first, you were able to maintain in the face of this catastrophic loss. I believe you even met with the President at one point? See — even I, with no access to regular media and a real wish to avoid your story, even I know these things. Or maybe what I “know” is some garbled version of what has been going on for you in your public grief.

This is a guess — an educated guess from one mother of a dead child to another — but I think things began to unravel as time went on and the reality of Casey’s complete and total and life-long and irrevocable absence hit your consciousness like a fist sinks into a gut. And the bunched knuckles kept coming back to deliver blow after unending blow.

One picture I happened upon in the grocery store showed you on your knees. I presume it was taken in Crawford since someone who didn’t know me well wanted to discuss your story and said you’d gone to President Bush’s ranch. I remember turning away from your face as you knelt there. Yours was a sorrowful visage, a broken face like the reflection from a fractured mirror. My heart twisted for you even though I barely glanced at the picture.

Your grief has served to polarize others. Some say you’re being used, some dismiss you as “crazy” — and tell me what mother of a dead child isn’t crazy? You’ve been cheated of your son; you walk through the valley of the shadow of death and no one comes to greet you. There will never, ever again be a laughing bear hug from this son grown tall and handsome.

When a husband or wife dies, we call the surviving partner the widow or widower. Why do you think it is that there is no one word to describe our condition, Cindy? Mother-of-a-dead-child is the best we can do? The lack of a name gives you some inkling how much our culture avoids the knowledge of this sorrow. If we named it we’d have some power over it. But the condition you and I share is unnamed because since time immemorial parents have dreaded this loss. It is the worst. There is nothing else that can be done to us. A motherless child is a pitiful creature and carries a life-long emptiness he or she tries to fill with other grown-ups. A childless mother is a crazy person and nothing can fill the hole, not if she had a baby a year for the rest of her life.

Do you have other children? I have three. And when people ask me, pleasantly, “how many children do you have?” I look at them blankly. It is all I can do to not to run screaming from the room.

Here is where I liken my experience to what is happening to you: after Shelagh’s sudden death, after the Rescue Squad carried her off and I watched them disappear down the drive, after the Medical Examiner returned her body to us, there was lots to do. The first morning I awoke I heard her say distinctly, laughing, “Mom, welcome to the first day of the rest of your life without me.” I think she was trying to make it easier in her Shelagh way.

There was so much to do. Her children needed clothing for the funeral, there were burial arrangements to make, a minister to call, family visitation to be arranged, a burial service to be created. So many, many people to notify. Elderly grandparents and a large contingent of Irish relatives to talk to and arrange for flights. As the days passed, I thought to myself “I can do this. I can just keep having this whole thing to organize and plan and I’ll be okay. As long as I never have to bury her, I’ll be fine.” Yes, this is crazy thinking. Even then, I vaguely knew that. 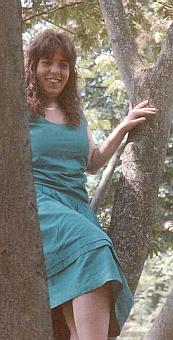 When her body arrived back from the Medical Examiner’s one of her brothers and I wrapped her in a winding sheet. Shelagh could never decide among Catholicism, Judaism, and a local bikers’ church for misfits. So she went to all three. We wrapped her in linen with a small cross embroidered on one end. A priest came to anoint her with oil. Her therapist came very early in the morning and left a small token of their work together, a secret symbol between them (though I knew what it meant). I gave Shelagh some of the lily of the valley left in the garden and her grandmother gave her a rosary. Her children gave her stuffed animals and drawings. She left the room shrouded in fair linen and surrounded by those things we knew she’d loved. The next day she was buried after a funeral in the bikers’ church. Later everyone said it was the most joyful funeral they’d ever been to.

After she was buried, I went back to the church to pay the minister before going on to the hotel to visit with my former in-laws, her father’s family. As I walked into the rest room there, I saw the trash can overflowing with the paper programs from Shelagh’s service. Immediately, I heard my daughter’s laughing voice exclaiming, “Mommm! Don’t these people realize I’m immortal?” She seemed amused and offended at the same time. In an automatic gesture of soothing her, I bent down to pat the overflowing papers… see, we are crazy.

Let me tell you the most important thing, Cindy: none of this matters. Not one piece of it. The only important part, the only piece with any real existence is Casey’s death. He is as gone as though he never existed. And you are so filled with sorrow and grieving you do not see how you will ever turn back from this road of vengeful crying out like some prophet who has wandered in from the desert.

Perhaps you never will. Not all of us come back, and certainly none of us return as the people we were before our child died. We are some other person, a stranger even to ourselves sometimes. But you will be less afraid of death yourself. Your son has gone before you, and that is harder than our own passing. Much, much harder. The lump in your throat will probably never disappear either.

As you’ve no doubt discovered by now, men and women handle their griefs very differently. Shelagh’s father and I split the cost of her funeral. I paid for everything else and he did the flowers (I’m afraid I said “f*** the flowers” — in my mind she had her beloved lily of the valley and what else was necessary or even good?) and he also paid for the burial plot.

Well. When you own a burial plot it is you who decides what headstone will go there. And if you decide there will be no headstone, then no headstone it is. So my beloved Shelagh, despite our entreaties, lies in an unmarked grave and I cannot bear to go visit where she lies there because of that.

For a long time, I considered her father’s behavior simply cruel and evil, but having had these two years to contemplate such a bizarre thing, I have come to think that perhaps it is his way of not having to face her death. No headstone? No dead daughter. It makes a crazy kind of sense, doesn’t it? Anyway, one day her brother called me and said he had a message from his sister. In a perfect imitation of her tossed-off wit, he said that Shelagh had told him, “Tell Mom not to worry about it. I always lived in substandard housing anyway.” It was so exactly her voice and humor that I started laughing. I still smile when I think of it.

For a long time, too, I hated time passing. Each day carried me further downstream away from Shelagh. I resented each holiday, each special occasion, things she would have wanted to be there for — as when, several weeks after her death her youngest brother had his Eagle Scout ceremony. Now, after several years, I have rearranged the furniture of seasonal celebrations. We do different things so that the hole where Shelagh is supposed to be doesn’t show so plainly.

Other bereaved parents tell me that your child will visit you. Some special “thing” you had together. That hasn’t happened for me yet, though the day she died we had terrific tornadoes and blackened skies. They were a greenish-black and the clouds moved with incredible speed over the green fields of May. One thing that does happen to me, like an emotional ‘twitch’ is that when I see a date written down, I automatically parse it: the date is either when Shelagh was alive or it is A.S. — After Shelagh. And the date of her death is like a gong…May 8th, 2003, May 8th, 2003, May 8th, 2003….

I don’t know what kind of hell your loss is creating, Cindy, and I can’t pretend to offer any solace. There simply isn’t any. Some things are unbearable and this is one. Nor will I suggest that you be brave. To hell with being brave. Wail until you can’t make another sound. Then sing this. It was one she used to have her brother play on his guitar:

In the end, Cindy, we are all stripped bare — nothing we have really belongs to us. In particular, we don’t have our children. Much as we cherish them, they belong to themselves and they belong to God. If you can open your hands and place them together in prayer, rather than bunching them in fists of rage, then you can let Casey go home… just let go.

If you don’t, then Casey can’t come back to you.

With my thoughts and my prayers for all of you who loved Casey,

22 thoughts on “An Open Letter to Cindy Sheehan”