Iraq the Model made a good point in his July 17 post about the Arab double standard used to parse events in Iraq. He was speaking of the previous day’s “barbaric attacks” which killed a hundred Iraqis. 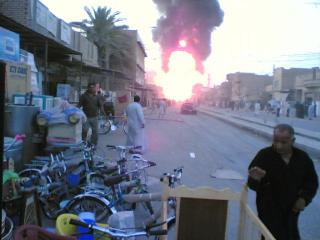 The image is astounding for its ability to show ordinary life against the backdrop of blazing annihilation. Notice that one person stands and watches but another walks down the street as though nothing is going on behind him. “Not my affair…”

What angers Iraq the Model is the double standard the Arab world applies to Iraq’s suffering:

He’s right about the double standard. We have it here, too. One standard for the poor insurgents, another one entirely for the nazified American military.

Iraq the Model makes a telling point against those who claim that this wouldn’t be happening were it not for the presence of the Americans:

And that’s really the point, isn’t it? Since it was all nice and quiet from where we sat, why bother? The supreme moral relativism has become “My brother’s keeper? It depends on the meaning of ‘brother’ doesn’t it? I mean everyone may define ‘brother’ as he sees fit. Those people have a right to decide for themselves. Not my problem.”

And so the Iraqis are to be left to fend for themselves? Here’s his take on that particular piece of politcally correct detritus regarding “brothers:”

Why indeed? And why do we not make an equally loud declaration? Actually some of us have; it’s called The Bush Doctrine.

7 thoughts on “Brother? What Brother?”