Right Wing Nuthouse recently posted a moving look back at D-Day and the character of the American soldier which allowed us to pull victory out of a brutal and chaotic situation. From the perspective of sixty years, he looks back on that assault as the defining moment for the twentieth century, listing the many disasters which might have followed on the defeat of those soldiers hitting the beach.

In a house filled with amateur historians, the post sparked dinner table conversations that lasted for several days. Finally, the consensus came down to one incident, one date, that changed the course of the 20th century and set into play the events which were to dog the rest of our days, even down to the present.

That moment, of course, is June 28, 1914. The incident is the assassination of Archduke Franz Ferdinand, heir to Austro-Hungarian throne, by Gavrilo Princip in Sarajevo.

Princip was a member of an anarchist group, the Black Hand. He was one of three assassins (that lovely Arabic word), sent to Sarajevo when it was known the Archduke was to be there, invited to inspect Army maneuvers. All three of these anarchists had tuberculosis and figured they wouldn’t live long. They wanted their short lives to be useful and to that end set out for their date with destiny.

However, the prime minister of Serbia was told about the plot ahead of time and ordered the men arrested. His orders were ignored, and the men arrived in Sarajevo. If only the arrest orders had been carried out. 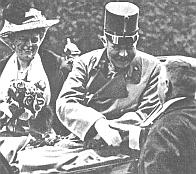 The first attempt on Franz Ferdinand’s life was a grenade under the Archduke’s car as they drove from the train station to City Hall for the usual reception. However, the driver of the car saw this and managed to speed ahead, avoiding damage. Unfortunately, two people in the car following were seriously injured. Thus, after the reception the Archduke insisted on going to the hospital to see them.

It was decided that the Archduke should be escorted to the hospital on a route that bypassed the city. Unfortunately, no one told his driver. It was only as they were turning into Franz Josef Street that the Army general accompanying them noticed the mistake and had the driver back up. Guess who was at a café on the corner? Gavrilo Princip. Firing from only five feet away, how could he miss? He shot the Archduke in the jugular vein and the Archduke’s beloved wife, Sophie, in the abdomen. As he was struck, Franz Ferdinand begged Sophie to live. “Think of the children,” he implored.

The couple died at the governor’s residence. If only someone had told Franz Urban, the driver of the car, about the change in plans.

The cascade of events following their deaths was like a carefully placed set of dominoes. The players in this deadly game were as follows:

1. Princip was a Bosnian Serb. It was presumed that the machinations of Serbia were behind the assassination. Thus the demands and ultimata by Austria-Hungary were on Serbia. They sent an “expert” to collect evidence.
2. Serbia was bound to Russia by alliance and by ethnic ties.
3. Germany was bound by its alliance with Austria-Hungary.

4. Austria-Hungary demanded apologies and cessation of anti-Austrian propaganda. They wanted cooperation from Serbia in their investigations. Meanwhile, Serbia stalled. This intestinal fortitude was encouraged by word from St. Petersburg that Russia would back them.
5. Now come Britain and France. Bound by a mutual alliance with Russia, the Triple Entente, they were obliged to come to Russia’s aid.
6. So began the mobilization: Britain readied the fleet, France mobilized.
7. Austria declared war on July 28th. Two days later, Russia mobilized, part of which was deployment on the German border.
8. The Germans made an ultimatum to Russia: cease and desist.

On July 29th, Germany proposed British neutrality. In return, the Germans would not annex Belgium or French territory. If only the British had agreed.

9. On August 1st, 1914 – less than six weeks after the Archduke’s death – Germany declared war on Russia.
And so the dominoes fell. From the invasion of Belgium to the Treaty of Versailles in 1919, the losses were massive:

The Great War of 1914-1918, the War to End All Wars, was the cultural equivalent of the Black Death. Its demographic deadliness lies in its victims: mostly fit young men. The war destroyed the “seed crop” of the next generation and divided our times into a Before and After, just as the Black Death had done for the 14th century.

But the numbers don’t tell it all. The most significant event triggered by Gavrilo Princip was not the Great War itself, but the Bolshevik Revolution, which ushered in the brief but deadly Age of Socialism. Socialism was in the air anyway, and would have taken its turn on the world’s stage. But the particularly virulent form midwifed by Lenin in the Soviet Union depended entirely on the immediate circumstances of the Great War.

In 1917, If only the German high command had not made the strategically brilliant move of sending Lenin to the Finland Station in a sealed train. If only if Russia had not suffered the particular reverses it did on the Eastern Front; if only the United States had entered the war earlier rather than later…If… if… if…

Timing was all, and timing led to the ascendancy of socialism. All the murderous totalitarian tyrannies of the 20th century — Fascist, Nazi, and Communist — were socialist in nature. One hundred million or more souls perished, directly or indirectly, as a result of socialism. Whether tortured and murdered in the camps, starved to death in deliberately engineered and accidental famines, or killed in the wars brought on by the dictators, the victims at the hands of the 20th century were, by and large, the victims of socialism.

Timing was all and timing allowed Gavrilo Princip his brief moment. Without that, there would have been no punitive Treaty of Versailles. Hitler would have remained a nobody. Lenin’s arrival in Russia would not have been so opportune, thus deflecting from their courses Stalin, Mao, Pol Pot, Castro and Guevara.

The 20th century began with Gavrilo Princip in June of 1914. It ended with Osama bin Laden in September of 2001. In Europe and all the territories of the Great War, socialism is on life-support. In America, a few ignorant souls call for its renewal.