“Gates of Vienna” worships at a little Episcopal church in the countryside of central Virginia. The Rev. Bruce Weatherly is an occasional supply priest there, and he recently brought his photo album to church and told us an inspirational story.

Fr. Weatherly was in the Marines in World War Two and was discharged in 1946. By the time the Korean War came along, he had been to seminary and was an ordained priest. He wanted to do his part for his country, and volunteered for another stint in the service, this time as a Marine Corps chaplain.

He comes from a military Episcopal family: his father was in the military and was an Episcopal priest, and the same goes for his son John.

In June of last year, John arranged for a surprise ceremony for his father. The Weatherly family met in Arlington under the pretense of a visit to the Iwo Jima memorial, and Fr. Weatherly was presented with an American flag after it had been raised and then lowered by a Marine captain at the memorial.

Fr. Weatherly was greatly moved, and was barely able to retain his composure. He reports the unnatural and surreal experience, as a lowly sergeant, of being saluted by a captain.

Here’s the email about the event that Fr. Weatherly’s son Mark sent to the family afterwards:

While the photo album was being passed around, Fr. Weatherly talked a little bit about his time in the Marines. He said, “I was no hero. I was just a Marine.”

Fr. Weatherly, I submit to you that those two words are synonymous. 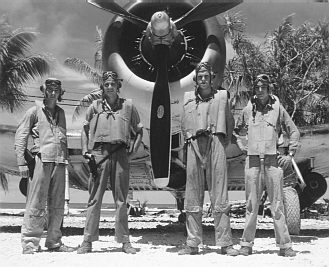 On a related note, Will May is the organist at our church and now attends the College of William and Mary. Several years ago, for his Eagle Scout project he videotaped and interviewed ten World War Two veterans living in our area. He wrote up his account and then published and sold it as a small book, with the proceeds going to charity. The online version of the book, Right in the Thick of It, is worth a look.

Thanks to the Weatherly family for all the materials.