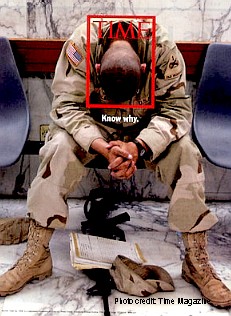 Why is this soldier downcast? Time magazine would like you to believe that he has been demoralized by his experience in a senseless war.

But perhaps he has just learned that when he returns from active duty, his service and sacrifices for his country will be mocked by the mainstream media, who will report virtually nothing of the good he has done and the successes he has achieved, but instead will focus on the violence of terrorists and give prominence to statements issued by the mouthpieces of terrorists. He knows that he will be honored and respected at Instapundit, Powerline, Blackfive, Mudville Gazette, Belmont Club, here at Gates of Vienna, and on many other blogs. The blogosphere recognizes the phenomenal success our military has had in the war against the Great Jihad, but the newspaper that plops onto his front porch in the pre-dawn dimness will open to reveal stories that are selected and spun to make him and his country look bad, so long as he and his comrades are waging a successful war on behalf of a Republican president.

There’s no need to analyze why this happens; it’s all so depressingly familiar: the overwhelmingly liberal opinions and Democrat voting habits of those who manage, select, and write the news; the great and growing cultural chasm between those who fight our wars and those who write copy about them; the sophisticated condescension of the elite literati towards those who practice a rough and dangerous skill like soldiering.

But the story discussed here and at Belmont Club yesterday has exposed a new level of corruption and deceit. A captured cameraman named Abdel Amir Younes Hussein, acting as a paid CBS stringer, appears to have been at the site of an IED incident in Mosul, having been given prior notice which allowed him to get the most advantageous shots, all in order that CBS should have the most valuable and graphic propaganda to display on national television screens to the disadvantage of our military and our President. This was not Mr. Hussein’s first rendezvous with terrorist destiny; images found in his camera reveal a number of previous terrorist incidents. The placing and timing of his shots indicate that he could not possibly have been able to take them without the close co-operation of the terrorists.

For all intents and purposes, the man is a terrorist himself, a terrorist paid by and acting on behalf of CBS. As I asked yesterday, Where is the outrage?

Presumably there are many others like him, paid by Western news services and helping to organize incidents which maim and kill American and Iraqi military personnel and untold numbers of civilians. The executives of major news organizations, acting from ideology and in order to make a profit, organize a process which helps maintain the fiction of a successful insurgency in Iraq.

The evolution of this meme is unprecedented: a story created and maintained by major news media and passed off as a grassroots resistance, all in order to serve a left-wing ideological agenda and do damage to a war president and his political party.

When there was still honor in the world, this behavior would have been labeled treason and sedition, and the perpetrators would have had to answer for it, sometimes with their lives. But we live in a degraded time.

CBS, I say to you: There is blood on your hands, and you have much to answer for.

8 thoughts on “Insult to Injury”